Recently I was asked to compare how closely WKO-modeled VO2 (VO2mod) tracks against actual measured VO2. My last few articles looked at how measured pulmonary VO2 (pVO2) tracked with HR for both continuous and intermittent workouts. So let’s look again at a few VO2max intervals and see how well the modeled numbers track to measured VO2.

Modeled VO2 in WKO is estimated based on real-time power and the athlete’s 90-day historical power-duration curve. The data below are visualized in WKO4 with some heavily customized charts. I’ll discuss the charts in much more detail over the coming weeks.

WKO5 was actually just released this week, and I’m already seeing some massive improvements in functionality. But I’m also seeing some bugs on my machine at least. I may have to wait to completely transfer over. I might be posting a mix of WKO charts for posts in the near future.

The first workout we’ll look at is the same 3x6min hard-start decreasing-power interval from back in December, 2018 that we looked at previously. Briefly, these are intervals designed to rapidly bring the athlete up to near VO2max with a high power start, then decrease power as the athlete fatigues to extend the duration sustained above 90% VO2max. 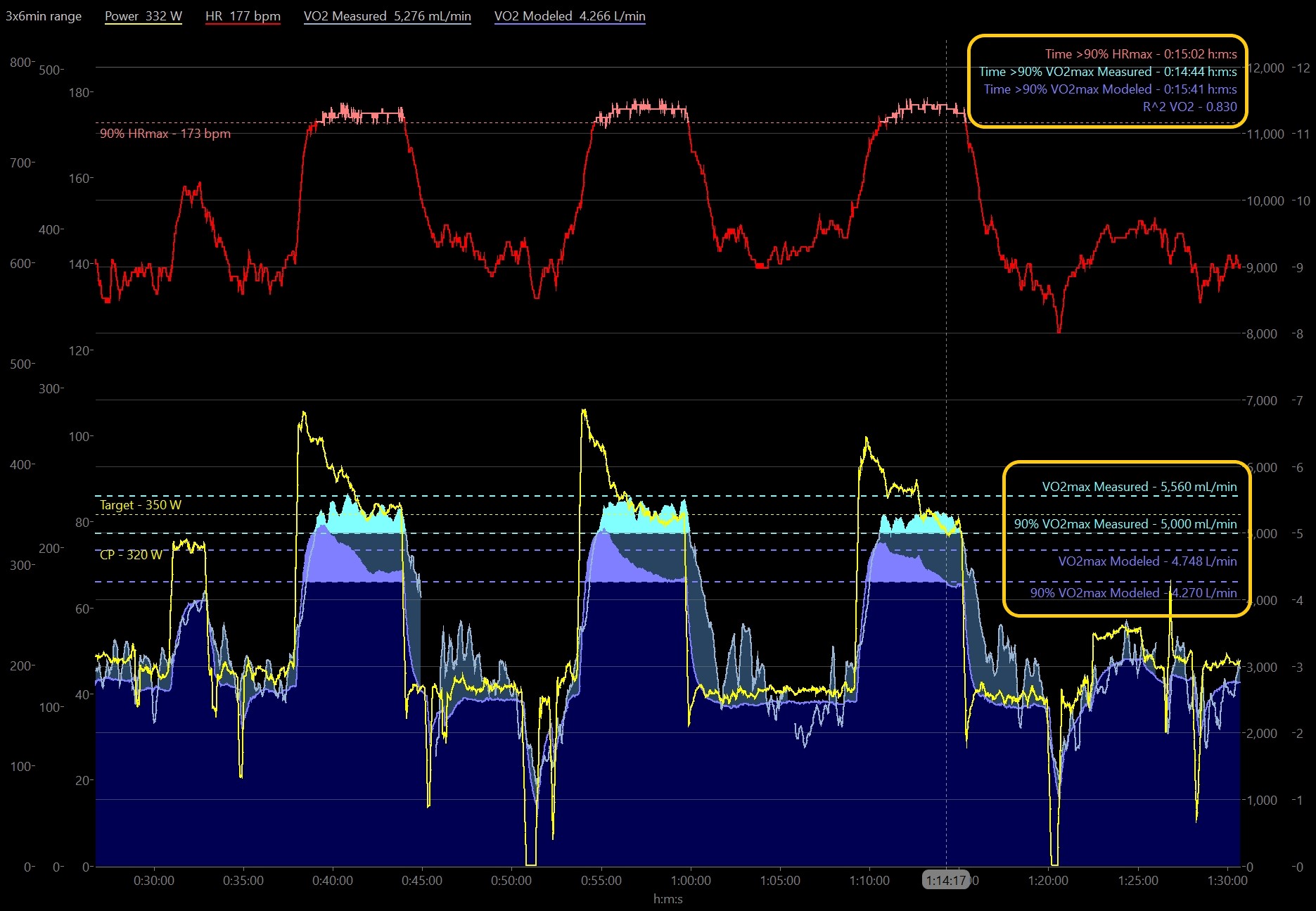 First thing worth pointing out is the difference between measured & modeled VO2max. WKO-modeled VO2max is estimated from the athlete’s 90-day historical power-duration curve. This workout was performed early in base training, so I expect my PD curve was not completely filled in. This would have resulted in a lower VO2max-mod estimate than what I was actually capable of in reality. This explains why the 90% VO2max targets occurred at different magnitudes for pVO2 (5000 mL/min) and VO2mod (4270 mL/min).

Looking at absolute VO2 through the workout, we see good agreement between the VO2 lines during the warm-up and recovery intervals. This suggests that the model was accurately able to predict VO2mod at submaximal intensities. The lines are also very close during the initial rise in VO2 at the start of each work interval.

Importantly, the times accumulated >90% VO2max (reported at top right) also show good agreement and track well to time >90% HRmax. Despite the different magnitudes for VO2max, both pVO2 and VO2mod reported me above 90% VO2max for around the same duration.

The difference comes during the decreasing-power work intervals. VO2mod is derived from power (which I’ll talk about more in an upcoming post) so as power decreased through the interval, VO2mod therefore also declined. However in reality pVO2 remained elevated during these intervals, as you would expect for a continuous near-maximal effort.

Without going into detail again, this difference may have been exaggerated by my Left leg blood flow limitation. This condition significantly degrades the power I can sustain for high intensity efforts. So let’s take a look at a similar workout from another athlete.

This workout was done in May, 2019. It was performed outside on Cypress mountain on the North Shore of Vancouver. This is kind of amazing that we can collect VO2 data in real-time on the road, literally in a real-world environment.

These weren’t targeted to be specific VO2max intervals. They were steady-power 5min intervals at a specific target power above the athlete’s FTP. Based on the athlete’s subjective report that he “was worried about puking in my mask by the end” I think we can assume he approached VO2max during the workout! 😅 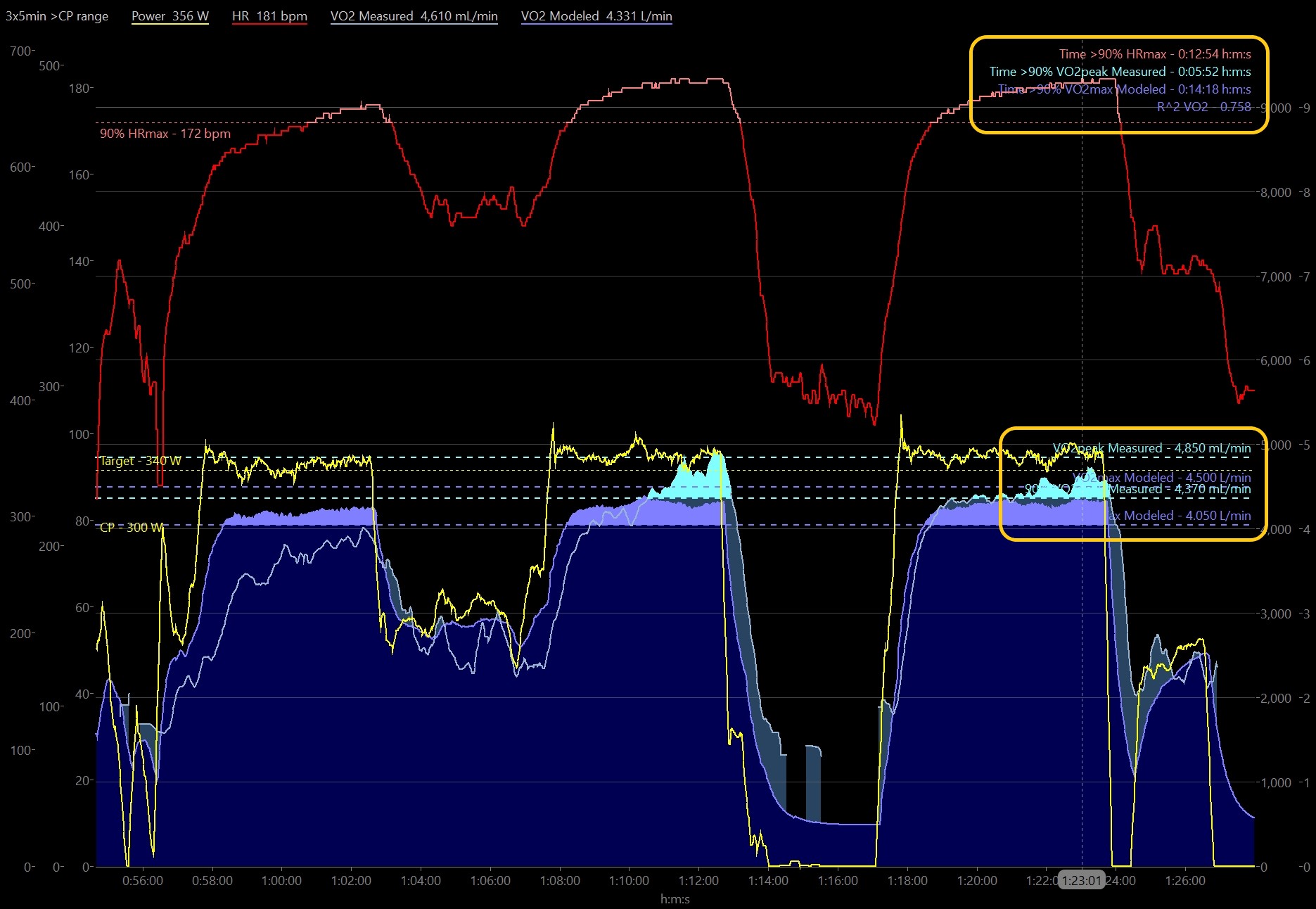 Note, since we didn’t establish true VO2max with a ramp test, I will be using the athlete’s VO2peak, the highest 30-second VO2 value he achieved during the workout, instead of VO2max.

This athlete showed a much closer estimate for pVO2peak (4850 mL/min) and VO2max-mod (4500 mL/min). This likely indicates that his PD Curve was more filled in and better reflected his true fitness.

We can again see that the major difference between measured & modeled VO2 was during the work intervals. While the decreasing-power intervals above show a steady-pVO2 trend, the steady-power intervals here show pVO2 increasing through the interval, as expected. This is caused by the VO2 slow component, which is basically a manifestation of fatigue and loss of efficiency during high intensity efforts above Critical Power or FTP.

There is also a difference in VO2 onset kinetics during the first two intervals. VO2 onset kinetics refers to the speed at which systemic aerobic metabolism ramp-ups in response to a change in workload (demand). Especially during the first interval, pVO2 was slower to rise than predicted by VO2mod. Very interestingly, pVO2 kinetics sped up through the workout, to be nearly identical to the predicted model by the third interval.

More recently I experimented with VO2 onset kinetics by going straight into a 5min VO2max interval without any prior warm-up.

One of the major reasons we perform a warm-up is to stimulate our aerobic system to work faster (ie. improved VO2 kinetics) and more efficiently. This ensures our body is primed to respond quickly to any change in workload (demand) with a rapid delivery of oxygen (supply) to the working muscles.

VO2 onset kinetics are markedly faster after a prior hard effort (ie. a priming effect, also see Bailey et al, 2008). So I decided to observe for myself how VO2 would react to an initial ‘cold’ effort, compared to subsequent ‘warm’ efforts. 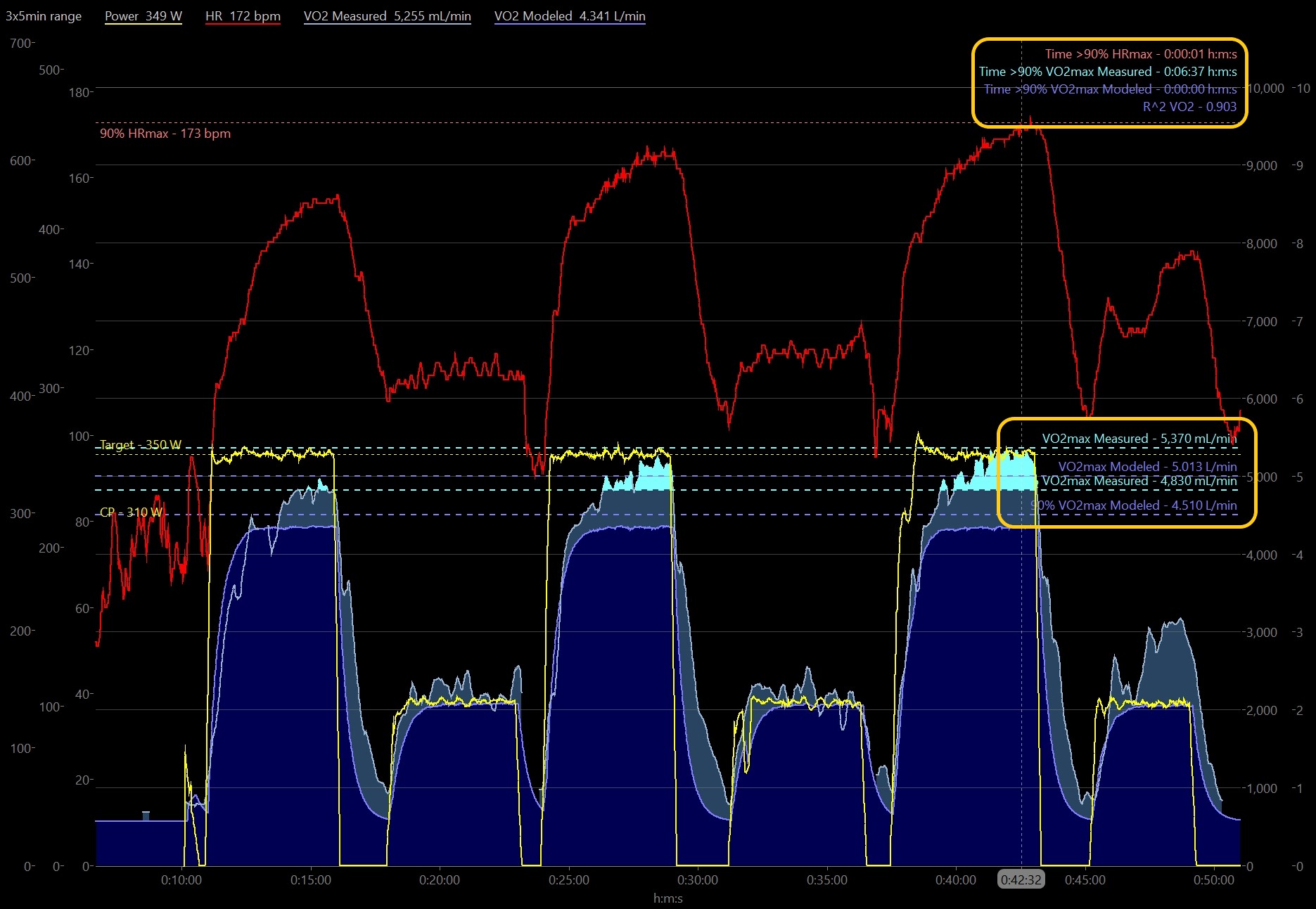 The first ‘cold’ interval shows the expected slower kinetics in pVO2 and a lower peak pVO2 compared to subsequent intervals. VO2mod remains the same across all three intervals. Once again VO2mod is derived directly from power. The rise in VO2mod will be proportional to the rise in power, regardless of the internal and external factors (fatigue, fueling, temperature, etc.) that influence VO2 onset kinetics in reality.

Even considering the difference in magnitude of measured & modeled VO2max as previously discussed, I was surprised to see the differences in accumulated times >90% VO2max. The model simply thought I wasn’t going hard enough to achieve 90% VO2max-mod at all. While pVO2 was reporting that I was well above 90% pVO2max during the two ‘warm’ intervals.

Heart rate shows an interesting comparison. Directionally it correlates better to pVO2, with a gradual increase in peak HR during each subsequent interval. However HR barely reached 90% HRmax, and therefore time >90% HRmax correlated closer to VO2mod at essentially zero… This again shows how potentially unreliable HR is in estimating pVO2.

I think the most important take-away here is the value of a warm-up for getting the highest quality out of your interval training. Also the realization that pVO2 response is not constant for repeated intervals even through a single workout session. This is a rationale for persisting through those later intervals during a workout instead of calling it quits. There still may be value to completing those final fatigued reps at a lower power target, as long as your body is still able to reach near VO2max. This is something I will collect more data on and discuss in the future.

I was hoping to conclude that WKO-modeled VO2 was ‘good enough’ or at least ‘better than nothing’ for use in training analysis and prescription. Unfortunately my opinion is that modeling VO2 from power alone is too unreliable and insufficient to provide additional value. I think trying to use power to estimate a linear VO2mod relationship is a case of over-extrapolating the data that will lead to erroneous conclusions.

Power already provides us with so much meaningful and prescriptive information, but it is limited as a simple mechanical output of a chaotic internal metabolic cascade. Power alone tells us very little about internal energy production or how our bodies are working to produce that power. That’s where we need measures like HR, VO2 and SmO2.

Let me be clear, I love the debate around the value of power and heart rate. I currently come down on the side that HR, for all it’s limitations, has descriptive and prescriptive value as the only accessible measurement of internal metabolic state. Power of course has value as probably the best measurement of external mechanical work. I think it’s a clear win-win to use both together to build a more accurate picture of training effect and physiological response.

I’ll finish with an open question: could Power & HR be combined somehow to more accurately model VO2? I’ve talked before about how I don’t quite fully understand the Power-HR-VO2 relationship and how all three components interact. Could combining power & HR compensate for each other’s limitations to produce a more reliable VO2mod?

Coming up I’ll look at some intermittent intervals. Then I want to go into more detail on the WKO4 (and soon WKO5) charts I’m working with for VO2 & SmO2, and bring estimates of anaerobic power into the discussion. I’m already writing those articles so it shouldn’t be another 3 months before the next post! 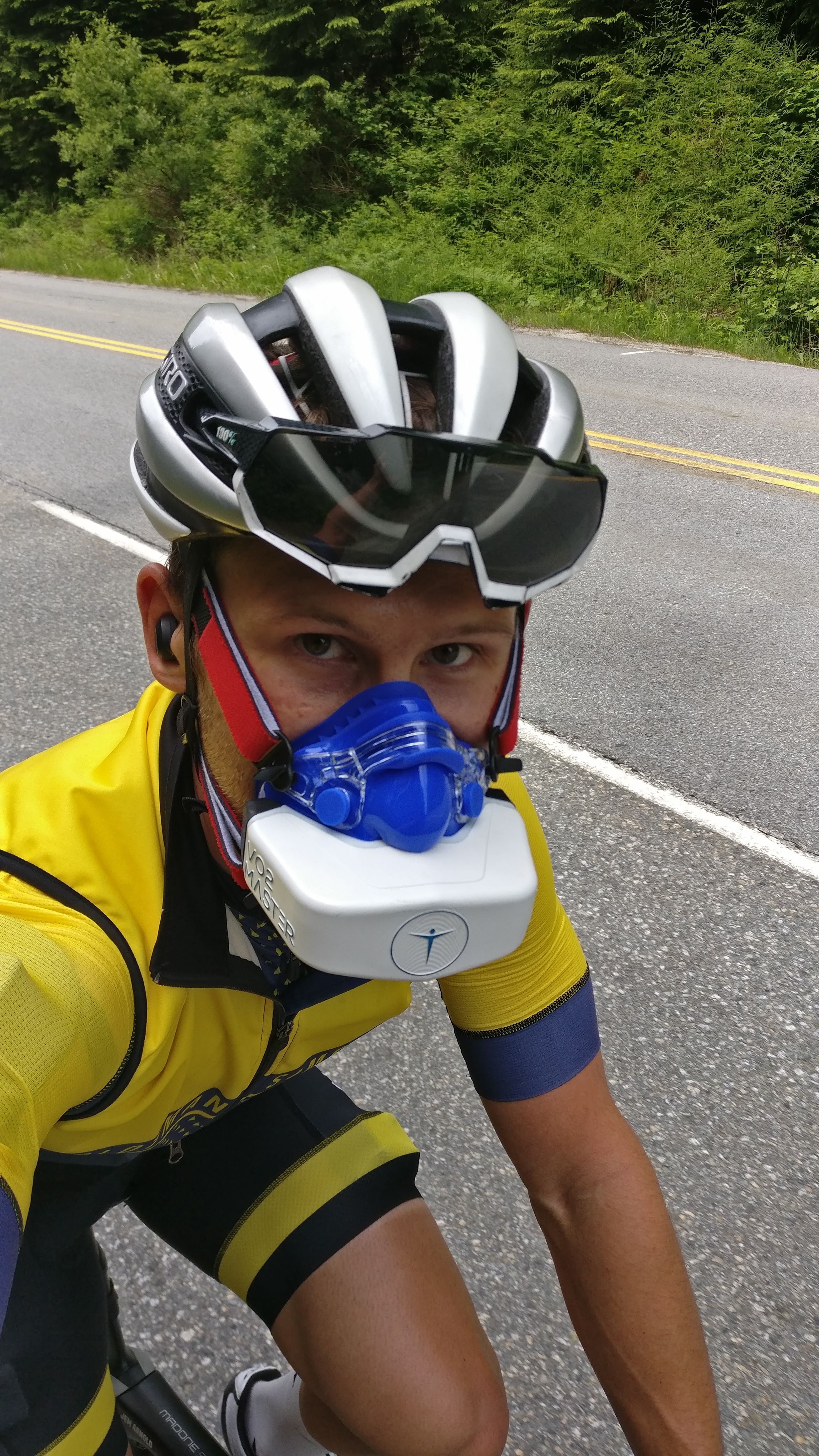 Thanks for sticking with me so far!

12 thoughts on “VO2 Measured to Modeled”