Today’s first Winter Training Camp of the year marked a friendly competitive time trial along a portion of our usual route, Iona Beach. Everyone was told it was a one-off max effort, individual starts, no drafting, no crossing the yellow line. We were all suitably attired in heavy layers, winter bikes and fenders for the January near-zero conditions.

The surprise was that a second effort immediately followed the first, for people to not only determine single max effort pace, but fatigue resistance for a second max effort.

It’s a nearly straight out-and-back course with minimal traffic – although a few people did get held up by some transport trucks – and a slow, gravel-strewn roundabout at the half way point. The usual conditions are a headwind out (going West) and tailwind back (East) however another surprise today was a reversal of the winds, giving a massive speed boost and deadly false feeling of power on the way out, only to hit a nasty leg-sapping headwind on the way back. For those trying to pace by speed alone, it was a humbling lesson in overconfidence!

What I want to look at is how different guys paced themselves, for the first ride when they thought it was a single max effort, and between the first and second rides where fatigue undoubtedly slowed everyone down.

I had the advantage of power to judge my pace. Even though I knew about the second surprise TT in advance I wanted to go full on for the first effort to compare between the two. My goal was 320 watts for the expected first 15-20 minute effort (depending on wind). I’ve done repeats along Iona at ~300 W and figured I could hold threshold for a max effort.

Despite all the planning, of course I started far too hard, averaging nearly 350 W for the first 2 minutes. I cut back on the watts as I noticed my HR jacked up near lactate threshold and focused on holding a Merckxian TT position for the remainder of the effort. But due to the early overpacing and probably an overambitious power goal for the conditions, I wasn’t able to hold my goal 320 W. The Out split was 7:40 at Avg 317 W, and Back was 8:51 at Avg 304 W, not including the turnaround.

My second effort was more steady, but the power dropped overall from fatigue. Rest interval between the two ~17 minutes efforts was 7 minutes, so close enough to a 2:1 RI (Rest Interval) ratio to allow sufficient recovery for this length of effort.

The overall time difference between the two efforts was only 9 seconds, reflecting an 11 W drop in Avg power. My power drop between splits for each effort were 4% and 2%, respectively and 3.5% between the two efforts. So actually fairly consistent. Both efforts were done in a similar Merckxian TT position, which I was happy to maintain successfully throughout both entire efforts.

Now to take a look at how others fared.

One of the best local climbers and obviously one of the strongest riders in the club. He doesn’t have power, but we can compare Strava’s Estimated Power for his two efforts. 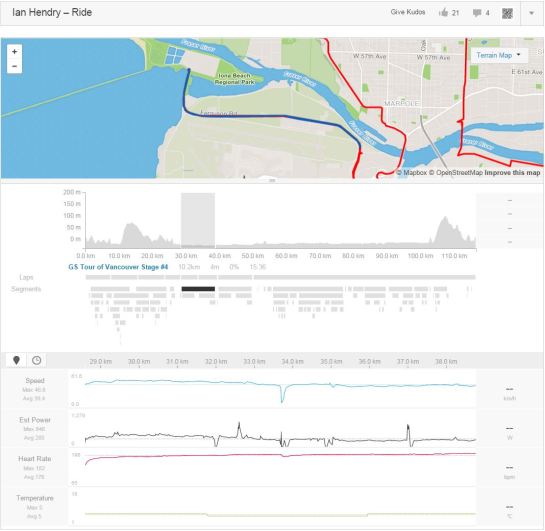 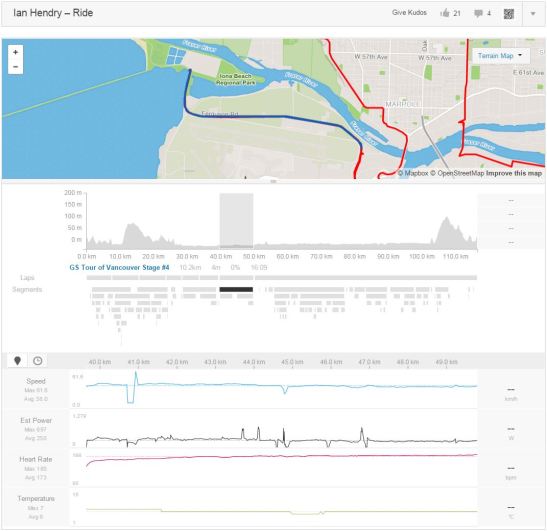 Estimated Power fails to account for the change in wind direction, but it might be revealing to look at how much the wind affected speed.

Ian’s average speeds were 39.4 and 38 km/h, respectively His HR was fairly consistent between efforts, at 176 and 173 bpm. These represent 5.5% and 2% drop, respectively between efforts. His estimated power for the Out and Back splits, not including the turnaround were:

Mostly, this shows the power difference made by the wind; over 100 W on his first TT effort! Why was the drop in est power less in the second TT effort? Possibly the windspeed had just changed, but if we look at his HR in the first few minutes of each effort, we can see that he started his second effort slower, ie. steadier by the equivalent of ~6 bpm but by the end his HR was <2 bpm difference. This might reflect steadier pacing in the second interval, knowing he had a headwind to contend with on the way Back.

Winner of the Masters Premier Series jersey in 2015 and just an all around powerhouse. 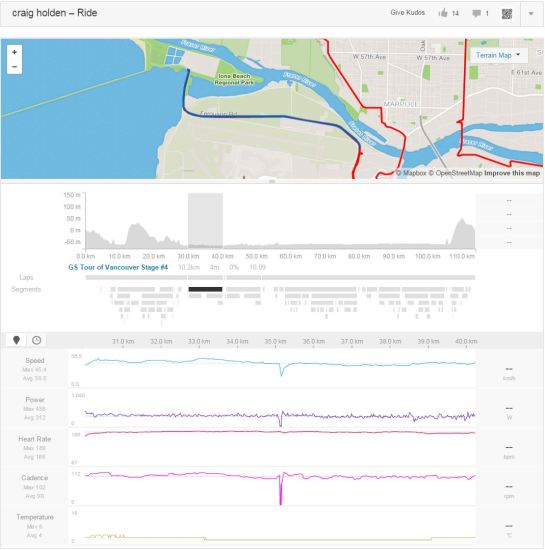 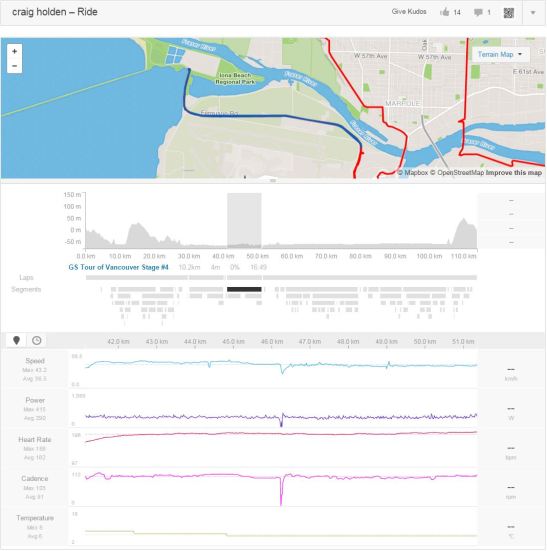 Looking at Power over each split:

That’s a power drop of 10% and 2.5% respectively between splits and a 7% drop between efforts. Obviously, his second TT effort was very well paced, but his first effort, well.. fell off a cliff! Again, I’m sure the unexpected wind direction didn’t help initial pacing strategies.

The most pro of all of us by far, and his Watts prove that! 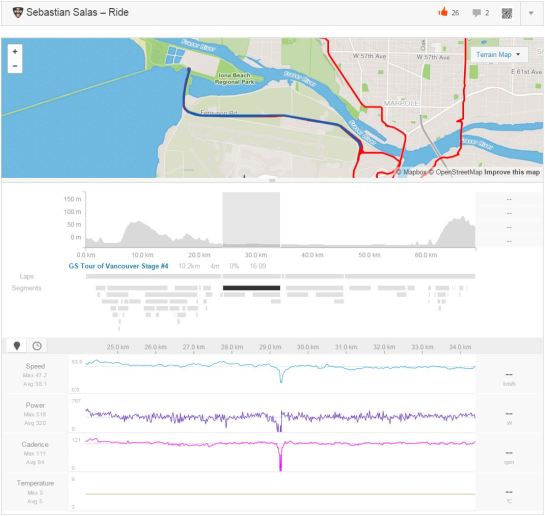 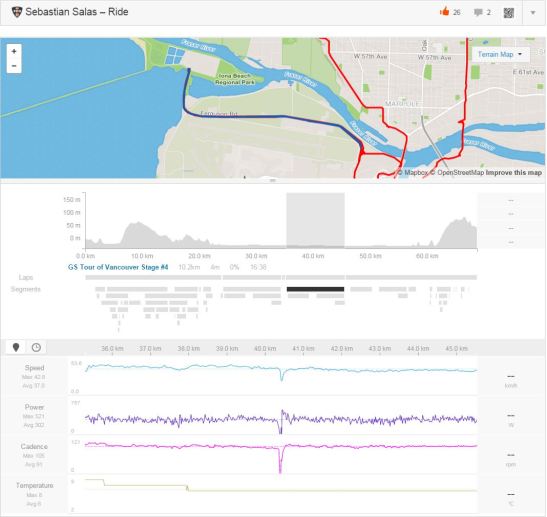 A negative split on the first effort, and within one watt on the second! He gained <1% on his first effort and dropped <0.5% on his second effort between Out and Back splits. He dropped 5.5% between efforts.

There are other insights to be drawn by looking at steady threshold efforts, but it’s especially valuable for pacing strategy to look at your own consistency; How steady is your power output over a ~20 minute steady effort, between the first and second halves and; how much power do you lose to fatigue between consecutive hold-nothing-back max efforts.

Hunter Allan recommends submaximal 20 minute intervals should be held within at least 3-5% of each other. Maximal intervals like these will obviously show a greater loss to fatigue, but are valuable to spot any obvious limitations to Power Endurance.

Another takeaway for me was the importance of being able to maintain power in an aero position; I saw plenty of guys on the road riding high on the hoods, especially in the second split of each TT effort as fatigue forced them up out of an aero position. But as the headwind was facing us on the return split this was exactly what not to do; face the wind full on with lower power and less aero position.

It was a good first Winter Training session and we were all sufficiently humbled by the end of the ride. But everyone is also looking forward to next week!

View all posts by Jem Arnold

Email me at jem@sparecycles.blog

My name is Jem Arnold

I write about physiology and endurance training optimisation.

I try to integrate ideas from the perspectives of an athlete, performance specialist, clinician, researcher, and especially as a curious enthusiast who just wants to learn from the smartest people in whatever room I find myself in.

Everything written is my own inexpert opinion. Any good ideas should be attributed to the many smart people I have learned from. Any bad ideas are due to my own temporary misunderstanding. My current opinions will most certainly change as I continue to learn. Nothing written constitutes professional advice.